Caribbean Development Bank, short for CDB, is a regional multilateral development financial institute established in 1970 with headquarter loacated in Barbados in the West Indies. It has 28 members, and China has joined in CDB in 1997. 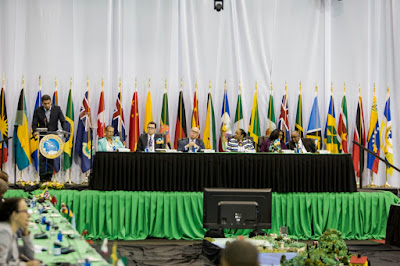 From 25-26 May, Chinese delegation has participated the 47 caribbean development bank annual meeting held in turks and caicos islands. 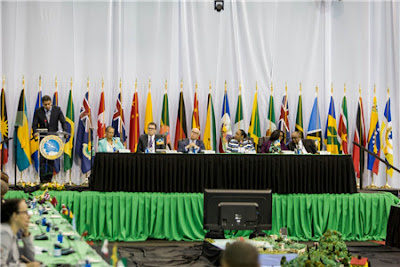 As a world-known audio and video conference system solution provider, GONSIN has offer 51 terminals ( 1 chairman+50 delegates) of GONSIN10000 series tripe-band wireless congress system which supports wireless communication in 2.4G /5.2G/5.8G frequency bands. It is the only one congress discussion system that can switch in three frequency bands freely, which ensure a stable operation in complicated wireless environment. 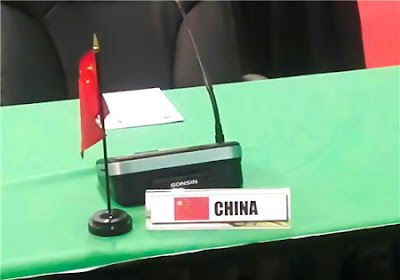 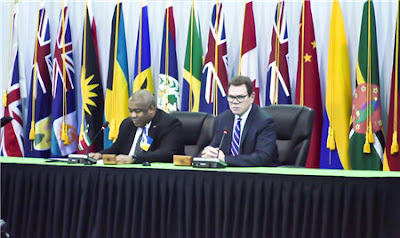 Meanwhile, there is GONSIN HD auto video tracking system to capture the image of every speaker during the meeting. Smooth HD images enrichs the participants’ user experience. 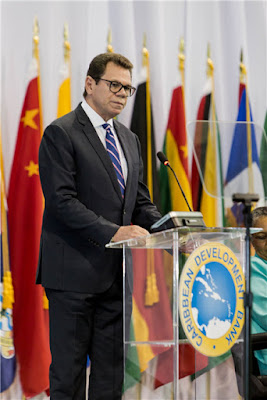 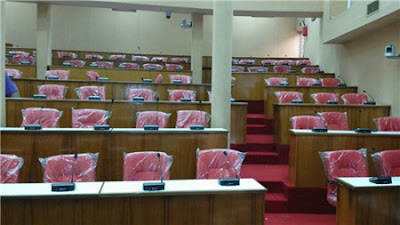 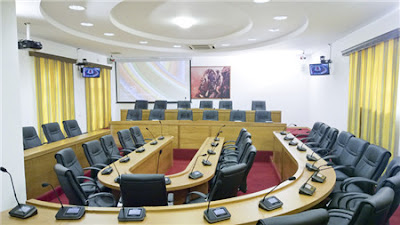 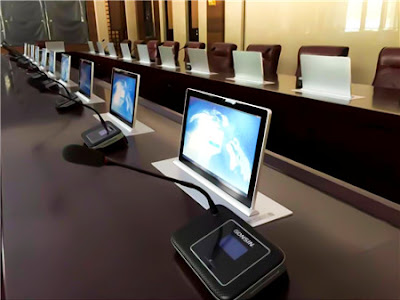 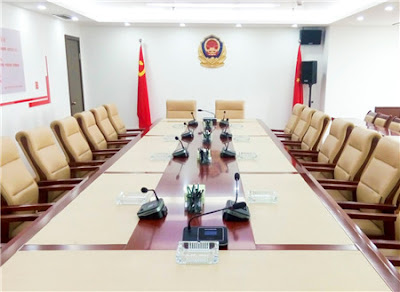 As a high-teah industry, conference system has attracted more and more resource for new technique by companies. Every company tries to define the new standard by technical methods. What is more, a new stand that conform to the era’s trend will accelerate the industry development. And, wireless teachnolgoy is the cutting-edge tehnology of conference system.We can forsee that wireless conference system will be widely adopted by the market.

GONSIN Footprint All Over the Economic Zone of the Belt and Road
In China, from Beijing International Airport to Xinjiang International Airport, from Xiameng Development Research Center to Guangxi People’s Political Consultative Conference, all above are GONSIN projects. Since the beginning of Marine Silk Road Museum, GONSIN has provided high quality conference system and service to this bright pearl in memory of ancient marine silk road history.

When it comes to international projects, since 2004, GONSIN voting system has been treated as national gift and presented to Moldova Parliament by Chinese Ministry of Commerce. After 14 years development, GONSIN has registered its brand in more than 60 countries with its produts shipped to 130 nations. In the list of GONSIN international project, we can find out multiple key projects loacing in the economic circle of the belt and road， such as Eurasian Continent Cooperation Fund Organization, National Tax Tower of Tajikistan, European Regional Office of World Custom Organization, African Union and European Union Cooperation Conference, Institute for Kazakhstan Citizen Economy, Turkey Government, Russian Government, Kenyan National Assembly, Indonesia National Stadium, Vietnam UNDP and etc.

GONSIN has insisted the cooperate motto of “ Delivering Trust & Value”, with the company mission as “Build bridges of highly effective communication in global perspective”. GONSIN will follow the pace of national strategy, upgrade its concept and brave to innovate. It would positivity expand it distribution in the belt and road. GONSIN have seized the development opportunity and contributes to the belt and road economic zone.

From May 14th to 15th, Belt and Road Forum for International Cooperation has been held in Beijing, which is the largest and highest-rank International conference in the framework of One Belt and One Road initiatived by China. 1500 delegates from more than 130 countries and 70 international organisations, including 29 heads of state or government, has attended the forum and reched more than 270 agreements . 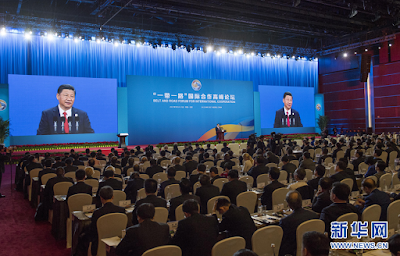 AV industry contributes to the forum
During the two-day forum, delegates have exchanged their views, reached board consensus, passed joint declaration. Behind the success of forum, there are contributions from various professional AV factories.
On the night fo May 14th, President Xi Jinping and guests and foreign delegations have presented the banquet in Great Hall of the People and watched the cultural performance in National Grand Theater of China. 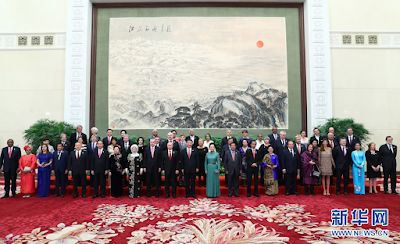 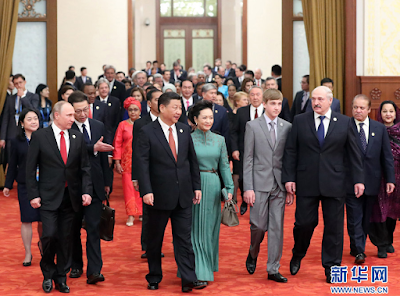 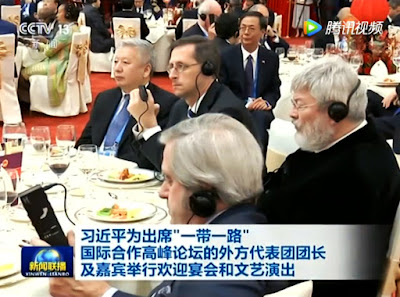 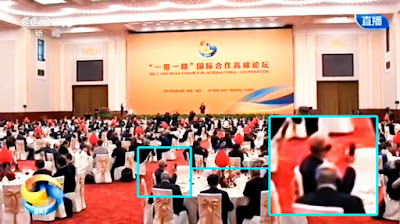 However, it is a little wired to find out the scene above.
Why didi the guest in above picture hold his receiver high? Certainly, they were not about to advertise the simultaneous interpretation system. The reason that they hold he receivers high is they want to receive the signal better. It is not hard to find out that what they used is a kind a IR simultaneous interpretation system. IR signal was blocked, the receivers could not received the signal smoothly, that might cause noise and breezing sound. As a result, delegates need to hold the reciver high to better receive signal.
As we all know, the IR simultaneous interpretation system could transmit multiple audio signal by infrared ray. The signal transmission of IR system is by the strength or the on-off of infrared ray. Infrared ray is sensitive to sunlight, high-frequency light source, because of its short wave length short, the weak diffractivity to obstacles, straight line transmission, limited reflect capability, it is mostly applied in the indoor small or medium conference. If IR simultaneous interpretation system is used in large scale venue like Belt&Road banquet, it requires many IR radiators installed to ensure full signal coverage. However, becase of high-intensity lights and participants, soft-mounted interior decoration, there are various obstacles for IR signal tranmission and high signal attenuation. 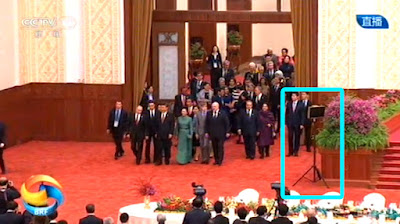 According to the unofficial statistics, there were at least 12 IR raditors installed in the banquet hall. Mass equipment stands not only increase the project budget and installation difficultity, but also cause aesthetics effect and obstacle on the entry corridor. When head of states and other important guests entered the banquet venue, they need to avoid the IR raditor stand. All above was caused by the limited effective transmission distance of IR simultaneous interpretation system. 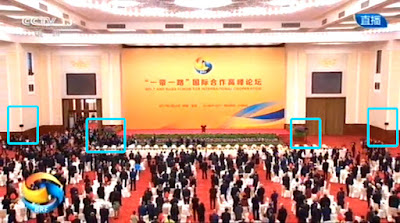 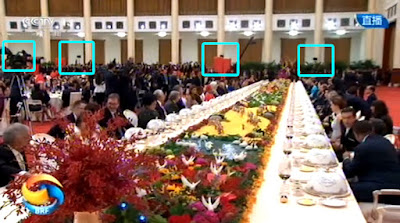 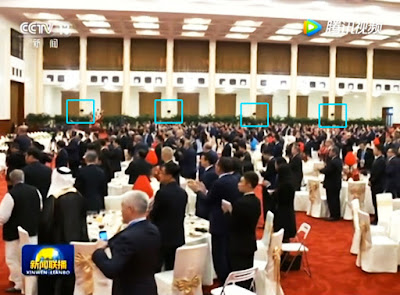 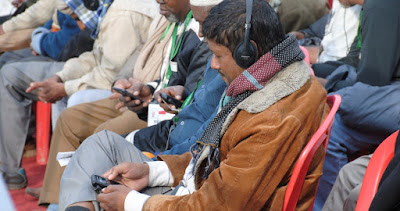 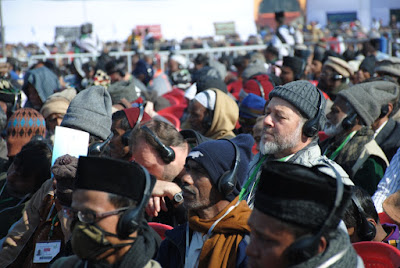 What is more, when it comes to confidetiality, someone may mentions that because the RF transmission has high penetrability and all-direction signal transmission, it is hard to ensure data security. However, to fully encrypt data, besides the basic physic methods, depends on the coding and decoding technique of data transmision and data encryption technique. GONSIN FS-FHSS simultaneous interpretation system utilizes GONSIN unique coding and decoding technique and 128-digit AES encryption and grouping technique, to ensure data security. 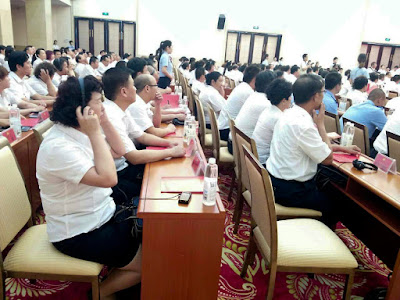 After the data security problem, people might wonder how about the anti-interference ability. Nowadays, there are many wireless devices, all occupy wireless resources. How to avoid interference to ensure stable communication? GONSIN has developed the unique FS-FHSS technology based on widely used frequency hopping communication technology which allows the system to monitor the frequency spectrum in the conference venue, and select the clean frequency brand. When the wireless signal changed, FS-FHSS interpretation system can avoid the interference by hopping frequency. Frequency selectiing and hopping double mechanism can ensure the stable communication.
One belt and one road initative has raised new demand for China to deepen the reform, and provided new stage for Chinese economic development. Under this background, there are more opportunities for AV industry.

Posted by GONSIN at 3:13 AM No comments:

Email ThisBlogThis!Share to TwitterShare to FacebookShare to Pinterest
Labels: FS-FHSS, GONSIN, One Belt and One Road

On 30th March, the 18th standing committee of Jiayu county People’s Congress has hold the second plenary session. In this session, Jiayu County 2017 Government Budget and others have been passed.

In order to ensure a successful and smooth conference and improve the efficiency of the standing committee, GONSIN technical team has offered a set of conference system solution after multiple communication with People’s Congress of Jiayu County.

GONSIN TL-3300 desktop digital conference discussion system is installed on the chairman desk. Since launched in 2015, it has been the hot sale product. GONSIN TL-3300 desktop digital conference discussion system has been successfully applied to CELAC - European Union Ministerial Summit, Columbian National Procuratorate, the fifth CELAC Summit, Chernobyl Shelter Fund and other significant domestic and abroad meetings. Its timbre rich and the high resistance to mobile phone interference has been top in the industry. The special hidden cable design has made it highly integrated with the conference venue, the overall effect is much perfect.

Email ThisBlogThis!Share to TwitterShare to FacebookShare to Pinterest
Labels: FS-FHSS，GONSIN

Environmental protection is has been the hot topic in the society, people pay more attention to energy saving and people has put more importance on how to save energy. As a result, how to save energy during the product design has been the main direction for every desinger. Embraced with its environmental protection ideology, Everbright has selected GONSIN 30000 series wireless congress system for its low power consumption and simple system framework and environmental-friendly design.

30000 series FS-FHSS wireless congress system is a basic put-and-use discussion system without any installation, debugging, supporting equipments. It is especially suitable for upgrading conference, temporary conference venue, rental market and historic building. With just one server, one WAP set of AP and serval terminals, conference system is ready to serve.

The system utilizes GONSIN self-developed FS-FHSS technology and fully digital 2.4G wireless communication technology. With this wireless congress system, you don’t have to upgrade the conference venue . The circuit design has been industry leading level. During the speaking mode, the service time is Speaking time is up to 20 hours. Intelligent charging management system supports individual charging with lowest power. and ensures a secure charing with battery detection, and charge each independent battery to achieve the low power consumption.

Nowadays, people has embraced the concept of environmental developing and energy saving saving energy. Product design not only improves the users’ experience, but carries the responsibility of environmental protection and energy saving. GONSIN has received products with ISO 9001:2008 certification for its quality management system and CE, FCC, CCC certificates,Its product have gained with great honors such as Torch Program Project, Guangdong Province Key New Product and Intelligent Building Quality Product and etc.